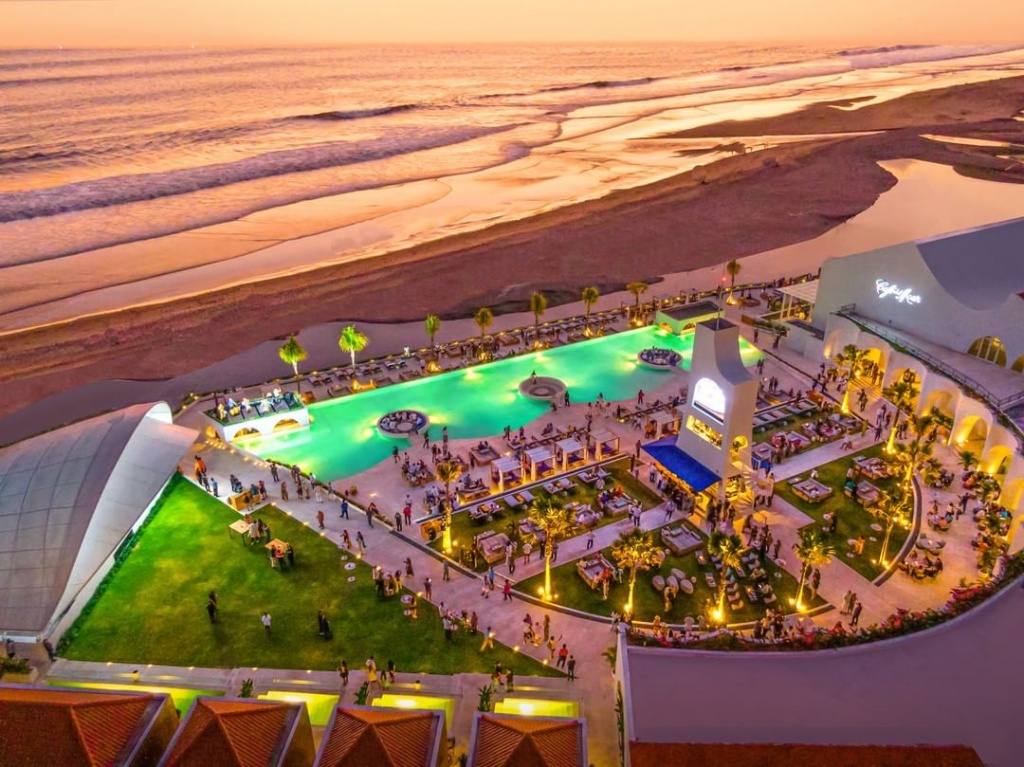 The best ideas are those which gather simple and universal concepts, such as enjoying a drink in a unique natural environment with music as the soundtrack for all those special moments.

It is almost 40 years ago since a group of friends opened their beach bar on Ibiza’s San Antonio Bay. Sunsets, Balearic beats, Mediterranean bites and a daily celebration of island life defined the Café Del Mar experience. The three partners, Carlos Andrea, José Les and Ramón Guiral enlisted the help of architect Lluis Guell and created the original Café Del Mar. Then along came DJ Jose Padilla and the soundtracks he created took Café Del Mar, and house music, global. From those small beginnings, Café Del Mar is on the move. With clubs opening across the globe, taking the brand worldwide, yet always remaining true to its original DNA.

Cafe Del Mar Bali also celebrates island life, sunsets, the very best House music, a Mediterranean attitude and good times, on a far larger scale than the original partners ever imagined. Fashioned in blue and white, much like the original, the super day club occupies a large stretch of beachfront in Canggu’s Berawa. The shell-like stage is set for international and local DJ’s, the pool stretches between two swim-up bars, dotted by entertainment pods and lined with generous day beds. Private pavilions are the perfect party starters, with pools, private bars and air-conditioned lounges. The bistro plays with Spanish-inspired favourites, transported by waiters alongside trays overflowing with glistening, fruit-filled cocktails. The music never ends.

The Beats Go On.

At one end, a massive covered stage is host to DJs who are among the biggest names in house music today. Music Director, Rodd Richards is charged with creating the sounds that define this Café Del Mar and the Australian club, based in Sydney’s Darling Harbour. “It’s my job to redefine the sound while staying true to its roots. It is always house music, we look to the original Balearic/chillout sound for inspiration, yet we are also educating a new audience, some of whom weren’t even born when the Café Del Mar series first launched,” he explains.

With a mix of resident and international DJs, headline talent, and live performances, Rodd curates each day from 3 pm through sunset and beyond. At least once a month a major event is scheduled. With a capacity of over 3,000 every day is a celebration at the stylish beach club. “Our demographic is 28-60, there are a lot of people who literally grew up with the Café Del Mar sound and they have expectations when they visit. We always feature a mix of chill music and all the elements of house music that are now being played, we have a brand, a niche, that defines us and we are literally seeing a rebirth of Café Del Mar now as it approaches it’s 40th year.”

For Bahamas-born General Manager, Kirk Bouffard his mission is to ensure, “that every single person who walks through the doors has a good time”. After a career that saw him running nightclubs in Vegas, with the Omnia/Hakkasan group, and in Singapore where he ran KUDETA, he returned to the Bahamas to pursue a different career but Bali and Café Del Mar proved too much of a temptation to resist.

“I always said if I was to return to Asia, Bali would be the place. This is definitely one of the most happening islands in the world right now.” Rather than being deterred by the competition here, he sees it as a positive. “People come to Bali to party and they have a great choice of venues, chances are they won’t go to the same place every day. Café Del Mar is recognised worldwide and curiosity draws them here. Our job is to keep them here and draw them back again,” he says. Opened in October, Café Del Mar and its signature restaurant are finding their feet. The grand opening party will be held around the same time that the brand turns 40, we can expect things to continue to amp up as we move towards that landmark.

As with everything, Café Del Mar Bali has pulled no punches when it comes to the food. While staying true to Café Del Mar’s culinary roots, this menu has been designed around simple but flavoursome food. The culinary team are all-star and with a glistening new dining room as their stage, expect something special here. British Chef, Graeme Palmer joins Café Del Mar following a stint at Scully from Ottolenghi London. He has also cooked with Gordon Ramsay at Claridge’s so we can expect a lot of skill in this kitchen.

The restaurant’s menu will sing with Mediterranean influences, in-keeping with the origins of the Ibiza-born brand and perfectly suited to the Bali climate.  “The philosophy of Mediterranean cuisine starts with using the best, freshest local produce, so we’ve interpreted classic dishes from Spain, Italy, France and Greece using local flavours and ingredients. We use unique local artisan cheese, sustainable seafood, Balinese chocolate, organic vegetables and Indonesian spices; everything is made from scratch in-house, like pasta, sourdough and fermentation. I’m really inspired b